So as a way to expand some of the analytical tools we offer the students at my work, I’m developing a version of my Data Literacy course that will use Python as well as R.  There is a lot of overlap in these two languages and both are of interest to our students as they develop their toolkits.  This document walks through how to set up Pweave on your machine so you can engage in a little Literate Programming (trust me, it will make your life suck a lot less.  To see how to set up Atom, see my previous post.

I believe that the time is ripe for significantly better documentation of programs, and that we can best achieve this by considering programs to be works of literature.  Hence, my title Literate Programming.

The main problem is that any iteration of the manuscript would require manually going through the process or changing the text document, rerunning the analysis, then replotting the figures.  Move this section up her and then go back through and make sure all your figure and table references are recovered.

But this is entirely upside-down!  Instead of Communicate -> Analysis -> Visualize, our workflow should be more like:

We should be data-focused, not manuscript focused!

The research manuscript is simply an advertisement of our research and the data, it IS NOT the research or data.

PWeave is like SWeave (and its better version Knitr) on R. It is a tool that we can use to interdigitate our analysis and how we go about presenting it all in one place.  This allows us to have a single document where we can have the data, the analyses, the output, and the verbiage that we use to describe what we are doing.  This tight coupling of the data to the rest of the components helps in Reproducible Research.

To install Pweave, you need to have atom and python already configured.  Then in Atom, install the following packages

Next, you can prepare a short script.  Here is a fragment of one.

What this does is mix in markdown text and code.  If you have not used Markdown before, it is pretty straight forward.  Here are some simple rules.

All the python code must be within the bounds marked by the three backslashes.  The code will be evaluated, from the top of the document to the bottom.  You do not have to show the code for it to run.

To weave the document into HTML (we can do other formats as well but this gets us going, open the terminal and type:

And it should produce a document in the same folder but as an *.html file.

Which is pretty cool.  Now, there are a lot more things you can do with markdown. 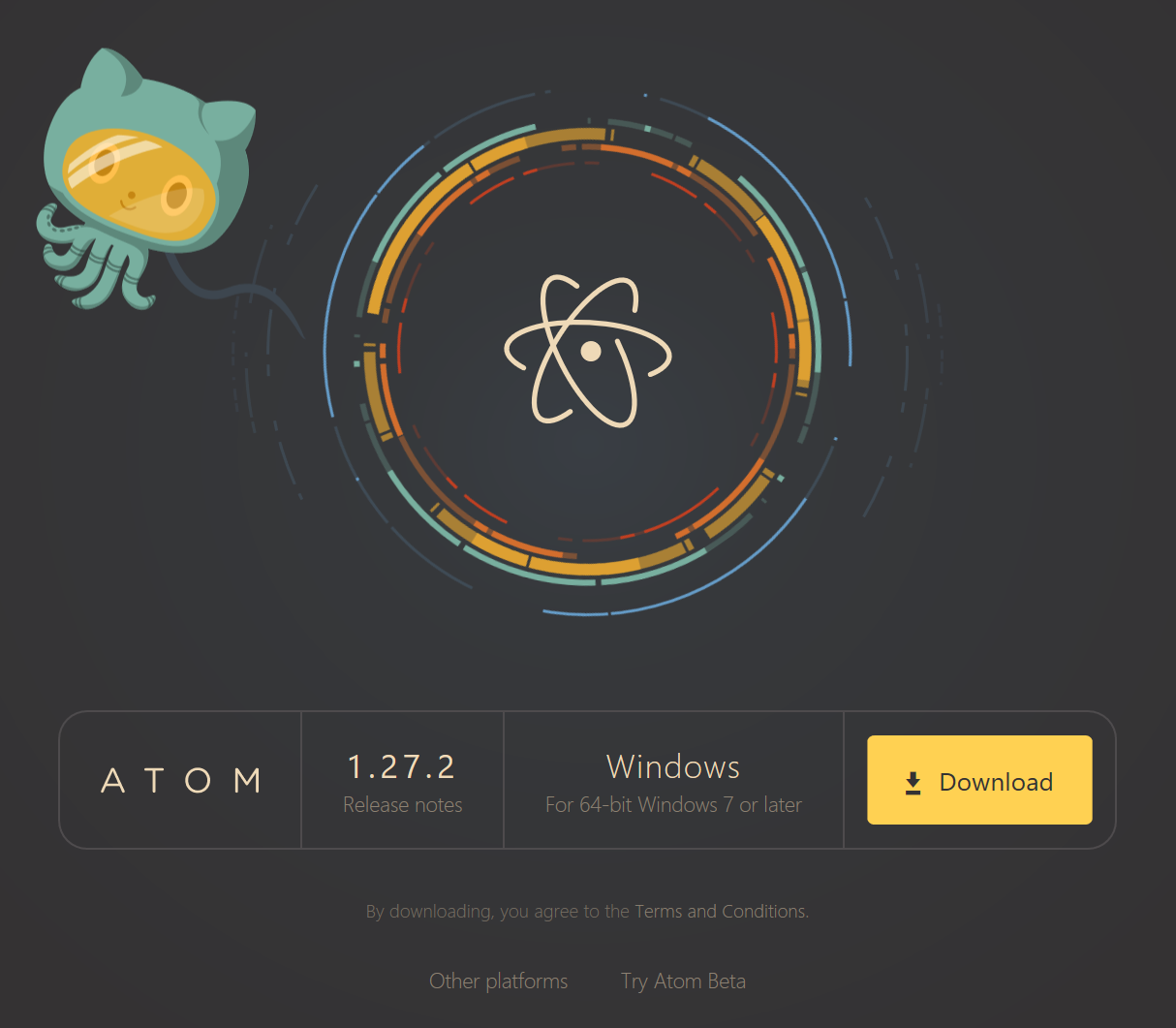 Being new to the Windows platform, I’m on the look for a good text editor that can do the myriad of tasks that we do each day.  Notepad is not an option, let’s be real.  I’m looking for something that can be extended and has been designed from the bottom up for wrangling text and writing code.  Ultimately, I would like something that is amenable to teaching both R and Python using a single interface.  RStudio is great for R but sucks for Python.  Juypter notebooks are clunky and toy-like.
Atom is created by the Github folks and is integrated into ‘the mothership’ repository.  Here is what I did to get it up and running and having Python running correctly.
Packages
Packages are extensions to the main editor that accomplish some function to make you life a bit easier.  Here are some of the ones I find helpful.   You can find packages and install them using Settings -> Install.  Then search for the packages and hit the install button.
Minimap
If you have scripts and/or code that is longer than a single page (and who doesn’t) minimap provides a graphical depiction of your code on the right-hand side of the window to allow you to easily jump up and down the file.  Here is an example on an R script. 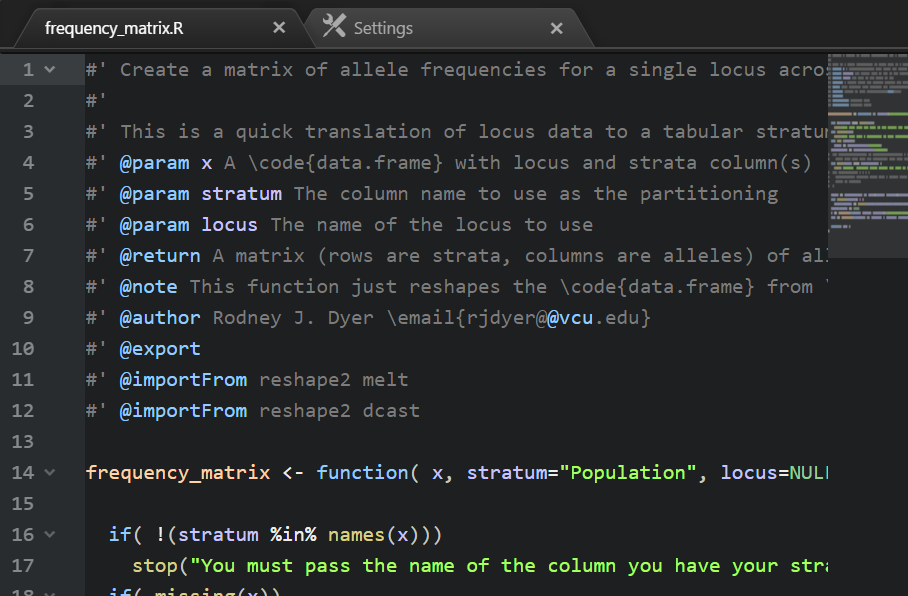 Script
Script is a package that runs code in the editor directly.  This means you can run individual lines as you develop and look at the output.  Very helpful.
Themes
There are a ton of themes, both overall for the editor as well as syntax highlighting, available.  To install one, select Install -> Theme and type a name from Settings.  Here is the atom-material-syntax being installed. 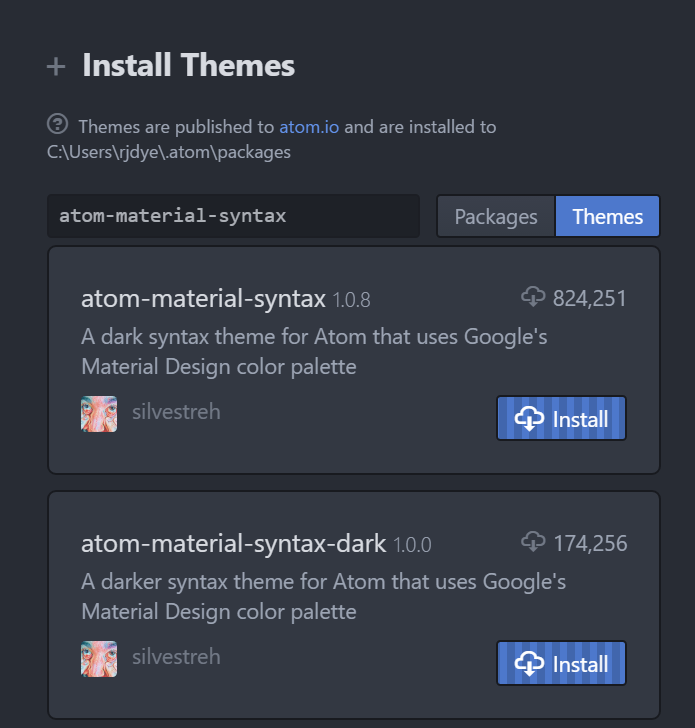 Once installed, you can change both the UI and the syntax colors. 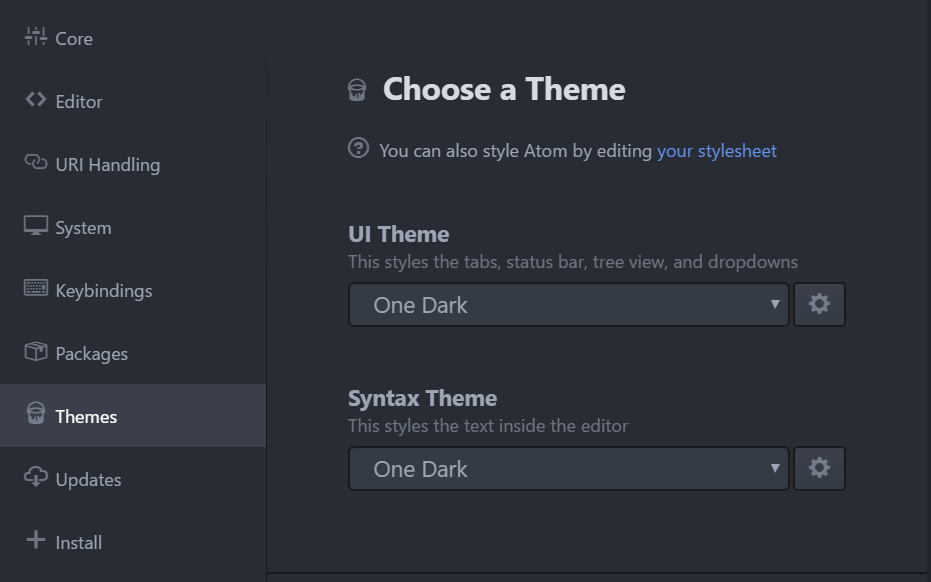 As I expand more into using Atom, I’ll add additional posts showing how I have configured it for use in my daily coding activities.